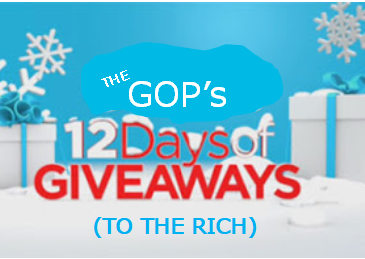 We hope everyone had a wonderful Thanksgiving! Now that we’ve been rejuvenated by delicious food and time spent with loved ones, we have one more battle to fight in 2017. Trump and the Republican Congress are determined to pass their huge tax giveaway to corporations and the wealthy, despite their plan’s massive unpopularity.

In response, Indivisible Springfield is beginning the “12 Days of Giveaways (to the Wealthy).” We previewed the plan before the Thanksgiving holiday, and now we’re ready to start in earnest.

Please call Sen. Portman and Rep. Davidson each day this week to express your concerns about the GOP tax plan (you can use the daily suggested talking points found below as a guide).

To increase our impact, please consider asking two or three of your friends to call every day as well. We need to make sure our reps can hear our voices above the voices of their deep-pocketed donors!

We know you’re busy now that the holiday season is upon us. We know you’re tired after 11 months of the Trump presidency. It’s been a crazy year. But we must finish strong. This tax plan, if passed, would be terrible for American workers today and future generations. We must make one final push before closing out 2017. Thank you for fighting and keeping Indivisible Springfield a vital agent for change!

MONDAY, NOV. 27—ACA MANDATE REPEAL
The Senate’s version of the tax plan includes a repeal of the ACA individual mandate. This will result in millions losing coverage, premium increases for everyone else, and even more instability in the individual insurance market. In fact, the Congressional Budge Office (CBO) projects that 13 million Americans will lose coverage simply so the very wealthiest can receive a huge tax cut. This is unacceptable!

TUESDAY, NOV. 28—GOP PLAN INCREASES TAXES ON A THIRD OF THE MIDDLE CLASS BY 2027
Even though Trump and the GOP are trying to package their tax plan as a middle-class tax cut, it would actually INCREASE taxes on folks making under $75,000 by the year 2027. This is because tax cuts given to lower and middle-class people expire by 2025, while the tax cuts given to corporations would be permanent.

In fact, the income groups that would see the largest decrease in their after-tax income are households in the $10,000-20,000 per year bracket and $20,000-30,000. On the other hand, the households in the top brackets will see INCREASES in their after-tax incomes after 2027, with families in the $500,000-1 million and over 1 million brackets faring the best.

WEDNESDAY, NOV. 29—ESTATE TAX REPEAL WILL INCREASE INCOME INEQUALITY
The estate tax is a wealth transfer tax that is designed to prevent the development of wealthy family dynasties in the United States. The GOP plan would repeal the estate tax, which would benefit only the top 0.2 % of estates (including the Trump family). We are already living in a time of unprecedented income inequality. Repealing the estate tax would only make the situation worse.

The GOP tries to label the estate tax as an unfair burden on “millions” of small farms and family businesses. However, only 80 small farms or businesses in the entire country would pay the tax this year (Center on Budget and Policy Priorities, 2017).
Tell our reps we don’t need a deficit-financed tax cut for the richest of the rich!

THURSDAY, NOV. 30—GOP TAX PLAN EXPLODES THE DEFICIT, SADDLING FUTURE GENERATIONS WITH DEBT BURDEN FOR YEARS TO COME
The GOP tax plan would add over a trillion dollars to the debt in just ten years (New York Times, Nov. 25, 2017). It is hard to understand how Republicans can claim to be the party of fiscal responsibility when this plan would blow such a huge whole in the deficit.

During the health care debate, we were told by Republican lawmakers that it isn’t “compassionate” to strap future generations with debt. But that is exactly what this tax legislation would do. As the New York Times put it, not only does this bill transfer wealth from the poor and middle class to the rich and corporations…it transfers wealth away from future middle class and poor people to the richest. Simply put, this bill is immoral.

FRIDAY, DEC. 1—CUTS TO MEDICARE, MEDICAID, AND POPULAR PROGRAMS FOR A DEFICIT-FINANCED TAX CUT FOR THE WEALTHY
One aspect of the tax debate that hasn’t gotten enough attention is that the enormous tax cuts for the wealthy will trigger huge automatic spending cuts to social insurance programs like Medicare. Why should retired folks who have worked hard their entire lives be asked to give up health care benefits so millionaires and billionaires can get a tax cut?